For me this raises two problems:

So in order to avoid those problems in the future, I propose that we disable systematically the capability to edit the source file of a component in weblate.
This can be done by going into “Management > Settings” of a component and then in “Files” tab by unchecking the “Edit base file” box, see: 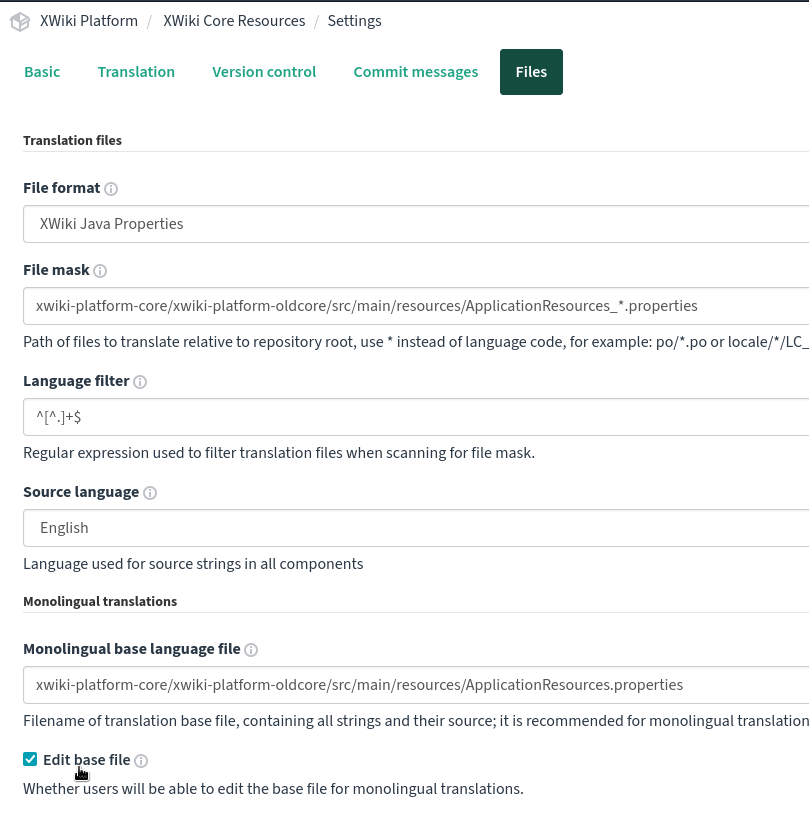 Unless someone disagrees, I’ll do that shortly for all xwiki components. For contrib extension components I’ll leave it to the appreciation of the different dev of each extensions.
Regarding the current state of the PR, I opened a ticket for the change that has been done and we’ll handle that separately.

+1 as iiuc it’s only for technical operations and not impacting normal translation operations.

I assume, that I am the author, that messed around with Weblate to rigorously and I am sorry for creating some irritation. When I was working with the Weblate UI I noticed a “Suggest” button and a “Save and continue” button. It was not clear to me what the difference was, so I chose the seemingly more direct “Save and continue”. If this option would be deactivated and the general process of changing translations would be described somewhere, that would probably help to avoid such “bad contributions” as mine apparently was. Sorry again, and glad @surli took over to avoid any possible breaking changes.

I assume, that I am the author, that messed around with Weblate to rigorously and I am sorry for creating some irritation.

Thanks but if somebody has to be sorry it’s more us: there was a flaw in our process and you just happened to show it to us

The proposed change have been applied on the translation platform.